“Another thesis I’ve developed with regard to major social and cultural institutions is this: Nothing ever starts out as bullshit but, left in the hands of man, everything usually winds up as bullshit. Such is the case with Christianity. Early Christianity, exactly like National Socialism, was born out of dire necessity. Jesus of Nazareth was the right man in the right place at the right time. During my years of lock-up I annotated at least six Bibles and I found the big left turn that everybody misses, rendering the whole thing as a waste of time. The Exodus of Moses was the last three million Whites getting out of decadent and dying Egypt. They militarily seized for themselves the most north-easterly province of Egypt, which was Canaan. Of course, they renamed it after themselves: Israel, meaning a prince ruling with God. There they found dark native inhabitants. God commanded they should kill all of these people. But they failed to do this, instead making slaves of them. Over much time they integrated them into their society. And with White, Israelite men chasing after these colored, Canaanite women, racial Jews were born. The word “Jew” isn’t even mentioned in the Bible until Second Kings, Chapter 16, Verse 6. “ – James Mason (author of SEIGE)

“Throughout the early to mid 1980s. Its contents were edited and published by Michael Moynihan as Siege: The Collected Writings of James Mason. He advocated leaderless resistance, calling for autonomous action by individuals rather than an authoritarian hierarchical organization.

Mason arranged for his papers and political materials to go to the University of Kansas Library.”
– https://en.metapedia.org/wiki/James_N._Mason

In the last year or so Mason has come to a better understanding of the bible, being able to identity who is who, and who is jew.

From  a jewdego-Churchianity perspective; he didn’t fully understand the scriptures. He went along with the exoteric and universal view of Christianity, the same understanding that pushes so many white nationalists away. The idea that Jesus was a push over,  and other distorted John 3:16 type contraptions. 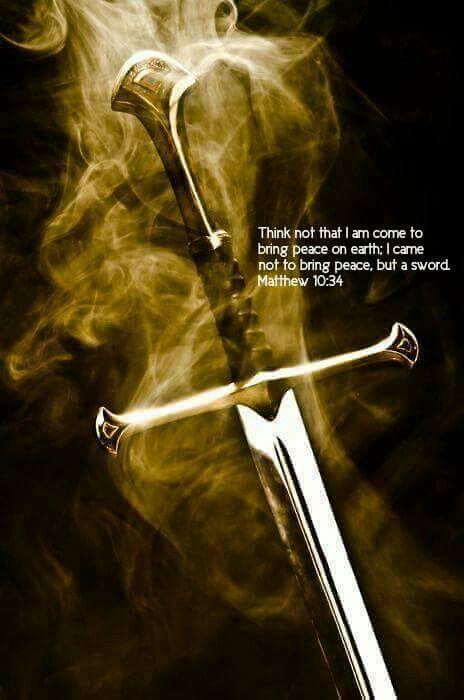 A cucked philosophy of John three sixteens, open borders, and pathological ethnomasochism sums up this despotic ideology that WN’s so vehemently oppose, and understandably.

While in prison, Mason was able to get ahold of British Israelite type literature, and later transcended that myopic ‘jew-first’ understanding that is British Israel; those who think that jews today are actually somehow pure racial descendants of Judah.

What follows is revolutionary, but not in the jewish sense.  This is evolutionary for White Nationalists the world over, who think Jesus is a jew on a stick.

If you think that, then study and show yourself to be correct.  2 Timothy 2:15

“I have hesitated and will continue to resist using the term “Christian Identity” because I know that will right away turn off too many good people who have been so badly let down and turned off by the Church. I was one of them for the first forty-five years of my life.

Then I went to prison on a gun charge and had lots of time on my hands to do little more than read, write and exercise. All of this I did. Since I was last in lock-up twenty years prior on an assault charge, things had changed drastically. Censorship and P.C. were everywhere dominant. I went in an instant from minimum to maximum security when my politics were found out About the only “literature” one could receive was religious and we are immediately back to what I’ve been saying about the Church all along: That very “opiate of the masses” that Karl Marx said it was.

But somehow a group calling itself Canadian British Israel was on the “approved” list. I wrote to them. Very soon thereafter I received a large box containing a ton of literature ranging from tiny pamphlets to hard-bound books. Utilizing my built-in “filter”, I was able to scan right through all religiosity and arrive at the core of the matter.

The supposed “Lost Tribes” of ancient Israel – some ten million individuals – made the unified decision to depart entirely the Middle East and make their way en masse into Europe. A great majority entered via the Caucasus Mountains of southern Russia. They broke upon the scene at about the same time as the “Barbarians” enter history.

The “Lost Tribes” with no exit point and the “Barbarians” with no entrance point. But at the same time.

We thus step right out of the Bible and into secular history. It is OURSELVES we are regarding here.

This is a most jarring realization.” – James Mason
http://siegeculture.biz/christian-identity/

“The Covenant God intended to make with Abraham, that is, the turning of the whole earth over to his descendants, could not include one of mixed blood. And, hence, Isaac. But though Abraham was instructed by God to send away both Hagar and Ishmael, he was assured that the eldest son would go on to be the father of his own great nation.

These were our own people situated at the crossroads of three continents and practically without natural borders, surrounded by alien, colored peoples. To follow up, it deeply worried Abraham and Sarah that their son, Isaac, might end up marrying one of these dark females himself, thus spoiling the family line. He did not, however, and next came Esau and Jacob. Again, even though Esau was first born, it is stated that he was “red” and “hairy”, an obvious reference to some sort of negative throwback. Therefore, the birthright, or Covenant, passed over to the younger son, Jacob. True, racial continuance once more.

A “great enmity” arose from this. Jealousy on the parts of the elder offspring of two generations. It is said that in the case of Esau, he was the father of the Turks. But it all begs the question: From where did this racial taint appear in the first instance?

That goes all the way back to Adam and Eve. Clearly, they could not have been the very first human-like creatures on earth. For one, the figure then called “the Serpent” and later referred to as “Satan”, was able to seduce Eve (there is no mention of any “apple”) and produce the first murderer, Cain. Then, once Cain was expelled from Eden, he went “into the Land of Nod” and took at least one wife to begin his own, Satanic, line. Who were these people?” – James Mason
http://siegeculture.biz/islam/ 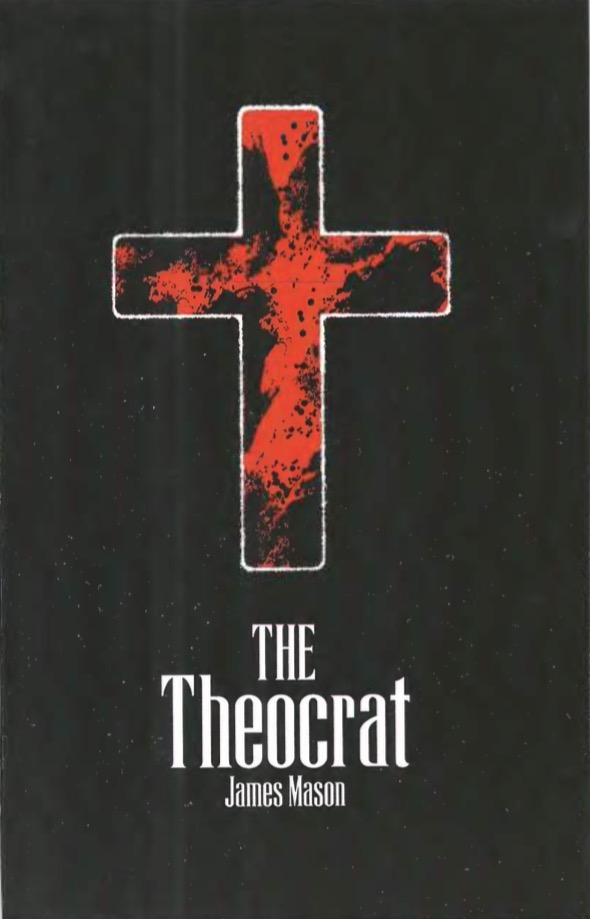 In this, the first to be released of five essays written inside prison, James Mason definitively and from a non-religious viewpoint unravels the Bible. The goal was to once and for all either debunk or validate the greatest of all the West’s books of wisdom. Next to the Bible as being the world’s most well-known but least read or understood book is Adolf Hitler’s Mein Kampf. Mason again does the work for you and condenses them both. Bringing out the most relevant and astounding passages. The end result of this research is nothing short of devastating.
https://www.amazon.com/Theocrat-James-Nolan-Mason/dp/1717517900/ref=sr_1_1?s=books&ie=UTF8&qid=1540145659&sr=1-1 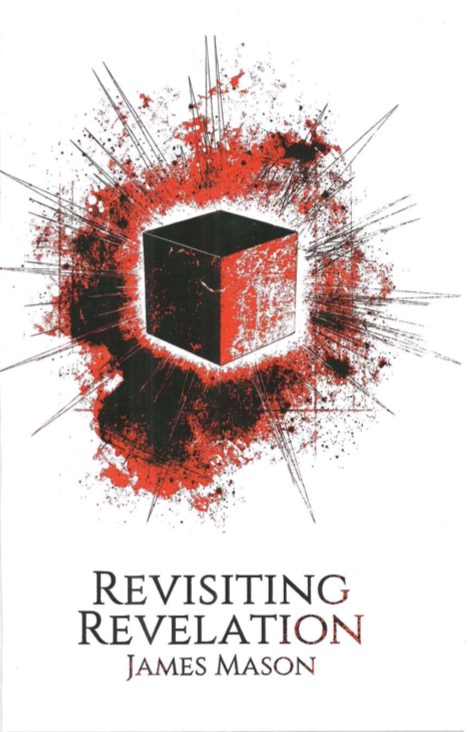 James Mason gives an unfiltered literal interpretation of the book of Revelation from his own observations. Demolishing the superstition often ascribed to the Bible by today’s modern Judeo-Christians, James Mason resolves this conflict, and proceeds to expound upon Genesis all the way to the final climax of Revelation to explain what this all truly means. –Amazon 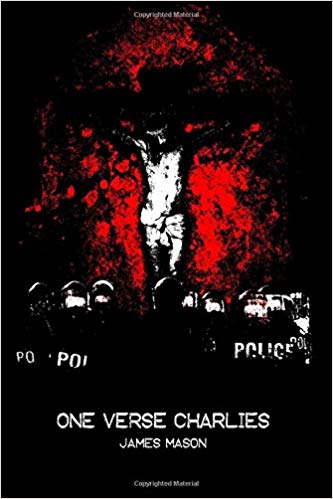 In today’s educational facilities, there is a repeated (perhaps deliberate) habit of presenting history in the most boring manner possible. The mainstream churches being no different in this case, as the Bible is presented in such mediocre fashion – as well was deliberately suppressed or misinterpreted – to the average Church goer. James Mason, being locked up at the time, took upon himself the task of either validating or invalidating the Bible once and for all, and what this book contains is the annotations and observations of the overwhelming truth he has come to realize. Made up of everything from those ‘boring passages’ that no one seems to care about, or those that the Pastors of today will not dare mention. Originally written under the pseudonym “Robert Burns” while stuck in confinement, James Mason comes to find that he has been in the vanguard of service to God all along. -Amazon.com 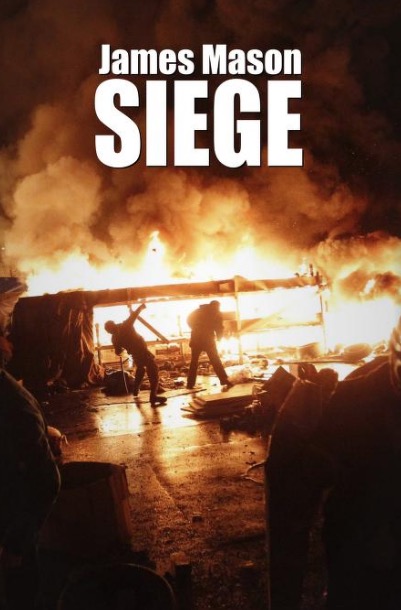