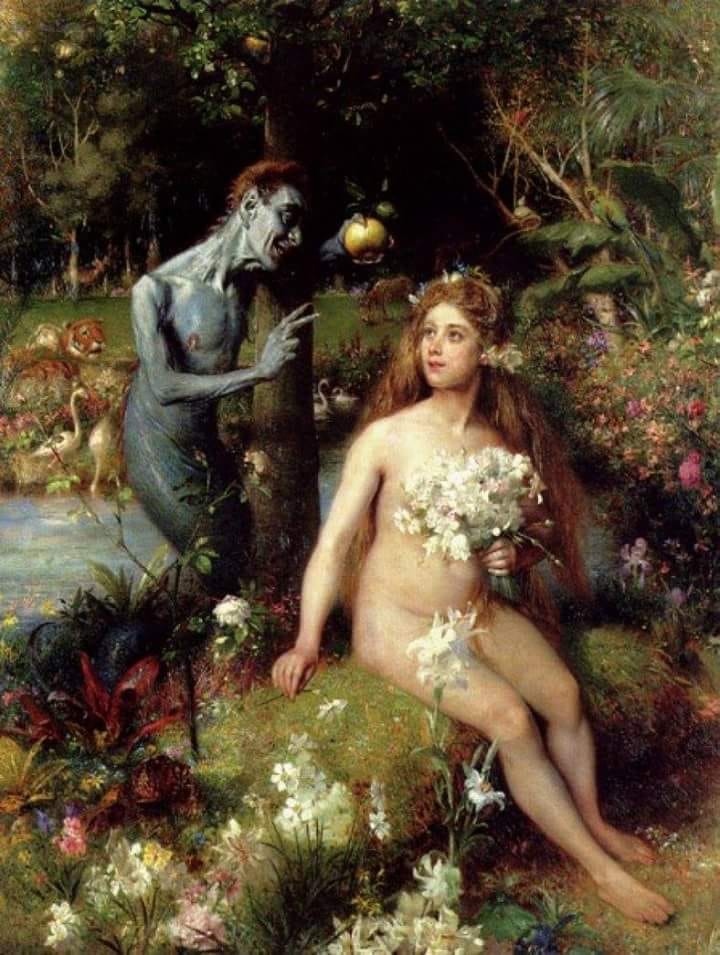 To understand our current plight as Christians we must have an understanding of the origins of not only ourselves, but of our adversaries. After the creation of Adam and his placement in the garden of Eden there was to be found a tree of knowledge of good and evil. Many understand this tree to be literal. Some understand it to be symbolic, but what is the symbolism?

It is evident in numerous places all throughout the prophets and the New Testament that trees, vines and other plant life symbolize people, families, nations and races. We will now establish this idiom (particularly as pertaining to nations and races) with a few examples from Scripture.

Here the prophet Jeremiah speaks of the fornication of Israel in mingling with the other nations:

“20For of old thou hast broken thy yoke, and plucked asunder thy bands; and thou has said, I will not serve thee, but will go upon every high hill, and under every shady tree, there will I indulge in my fornication.

21Yet I planted thee a fruitful vine, entirely of the right sort: how art thou a strange vine turned to bitterness!

22Though thou shouldest wash thyself with nitre, and multiply to thyself soap, still thou art stained by thine iniquities before me, saith the Lord.”
-Jeremiah 2

Here the prophet Ezekiel describes Assyria as a tall and proud tree:

“3Behold, Assyria was a cypress in Libanus, and was fair in shoots, and high in stature: his top reached to the midst of the clouds.

4The water nourished him, the depth made him grow tall; she led her rivers round about his plants, and she sent forth her streams to all the trees of the field.”
-Esekiel 31

Here the prophet Isaiah relates God’s promise to renew and replenish the nation of Israel:

“5I will be as dew to Israel: he shall bloom as the lily, and cast forth his roots as Libanus.

6His branches shall spread, and he shall be as a fruitful olive, and his smell shall be as the smell of Libanus.

7They shall return, and dwell under his shadow: they shall live and be satisfied with corn, and he shall flower as a vine: his memorial shall be to Ephraim as the wine of Libanus.

8What has he to do any more with idols? I have afflicted him, and I will strengthen him: I am as a leafy juniper tree. From me is thy fruit found.”
-Hosea 14

Here John the Baptist refers to the Edomites among the Pharisees as a race of vipers and promises that this bad race, represented as a tree not bearing good fruit, is to be hewn down:

“7 But when he saw many of the Pharisees and Sadducees come to his baptism, he said unto them, O race of vipers, who hath warned you to flee from the wrath to come?

9 And think not to say within yourselves, We have Abraham to our father: for I say unto you, that God is able of these stones to raise up children unto Abraham.

10 And now also the axe is laid unto the root of the trees: therefore every tree which bringeth not forth good fruit is hewn down, and cast into the fire.

11 I indeed baptize you with water unto repentance. but he that cometh after me is mightier than I, whose shoes I am not worthy to bear: he shall baptize you with the Holy Ghost, and with fire:

12 Whose fan is in his hand, and he will throughly purge his floor, and gather his wheat into the garner; but he will burn up the chaff with unquenchable fire.”
-Matthew 3

There is another idiom which must be established if we are to understand the events in the garden and the fall of Adamic man. Here we will provide a witness from Scripture that the act of eating, particularly of eating what is forbidden, is symbolic of sexual intercourse.

“20This is the way of an adulteress:
she eats and wipes her mouth
and says, “I have done no wrong.””
-Proverbs 30

Now that we have begun to see these idioms in Scripture we will look to the profane literature of Mesopotamia so that we may further establish the nature of these ancient Shemitic idioms.

In the Akkadian Epic of Gilgamesh (a Shemitic text extant in the time of Moses) the wild beast-man Enkidu is seduced by a harlot for the purpose of captivating and taming him:

“Go, my hunter, take with thee a harlot-lass.
When he waters the beasts at the watering-place,
She shall pull off her clothing, laying bare her ripeness.
As soon as he sees her, he will draw near to her.
Reject him will his beasts that grew up on his steppe!”
-The Epic of Gilgamesh, Tablet 1, part 3, lines 40-45

Notice that the sexual appeal of the harlot is described as ripeness, a characteristic of fruit. Now we will see as the harlot comes to Enkidu what comes of such seduction:

“The lass freed her breasts, bared her bosom,
And he possessed her ripeness.
She was not bashful as she welcomed his ardor.
She laid aside her cloth and he rested upon her.
She treated him, the savage, to a woman’s task,
As his love was drawn unto her.
For six days and seven nights Enkidu comes forth,
Mating with the lass.
After he had (his) fill of her charms,
He set his face toward his wild beasts.
On seeing him, Enkidu, the gazelles ran off,
The wild beasts of the steppe drew away from his body.
Startled was Enkidu, as his body became taut,
His knees were motionless – for his wild beasts had gone.
Enkidu had to slacken his pace – it was not as before;
But now he had [wi]sdom, [br]oader understanding.
Returning, he sits at the feet of the harlot.
He looks up at the face of the harlot,
His ears attentive, as the harlot speaks;
[The harlot] says to him, to Enkidu:
‘Thou art [wi]se, Enkidu, art become like a god!
Why with the wild creatures dost thou roam over the
steppe?
Come, let me lead thee [to] ramparted Uruk,
To the holy temple, abode of Anu and Ishtar,
Where lives Gilgamesh, accomplished in strength,
And like a wild ox lords it over the folk.’”
-The Epic of Gilgamesh, Tablet 1, part 4, lines 16-39

Notice that after lying with the harlot that Enkidu “had wisdom, broader understanding”, and that his seductress tells him he had “become like a god” just as we see in Genesis:

“5For God knew that in whatever day ye should eat of it your eyes would be opened, and ye would be as gods, knowing good and evil. 6And the woman saw that the tree was good for food, and that it was pleasant to the eyes to look upon and beautiful to contemplate, and having taken of its fruit she ate, and she gave to her husband also with her, and they ate. 7And the eyes of both were opened, and they perceived that they were naked, and they sewed fig leaves together, and made themselves aprons to go round them.”
-Genesis 3

Observe that Adam and Eve are now ashamed of their nudity and conceal it, showing clearly sexual the nature of their shame.

As elsewhere in the Scruptures the serpent is Satan or one of his brood and it is clear that he and his ilk were cast down to earth where they and their brood are known idiomatically as the serpent and it’s seed aka a “race of vipers” (Genesis 3.15, John 8.44, Matthew 3.7, 23.33 et al.).

“18 And he said unto them, I beheld Satan as lightning fall from heaven.”
-Luke 18

8 And prevailed not; neither was their place found any more in heaven.

9 And the great dragon was cast out, that old serpent, called the Devil, and Satan, which deceiveth the whole world: he was cast out into the earth, and his angels were cast out with him.”
-Revelation 12

I believe it is clear in light if this evidence, that the serpent was of Satan’s brood, and that the tree Eve ate of was that brood who had known both good (pure Angelic glory) and evil (rebellion from God and the corruption of races) as described in Genesis 6 and all of the extant Enoch literature. I hope that it is also clear to my readers that when Eve ate of the tree she brought sin into the world through this act of fornication and the offspring thereof through Cain and the Kenites.

This is not only evident in Scripture where the Kenites and the Nephilim (both the progeny of the seduction of Adamic women by Satan’s brood) are the source of great evil, but it is also evident in some profane writings of the Adamic world.

Here we will present an excerpt from Baghavad Gita concerning the origins of evil. The Indo-Aryans who formed Vedic culture were comprised of a multitude of Shemitic Persian-Elamites and Scythian-Israelites as well as Japhetic Medes. All of these peoples were likely aware of the events of Genesis 3, and living in India as they did among racially alien Dasyus and Dravidians they were doubtless well aware of the racial implications.

While Baghavad Gita and other Indo-Aryan texts have likely suffered interpolations and alterations at the hands of Hindus during their time in non-Aryan hands, this portion of the text clearly reflects the Vedic awareness of the origins of evil and its development within a society.

Next time we will discuss the implications of these events in Genesis in later Scriptures as well as how they relate to the ministry of Christ and, ultimately, the judgement of the earth.

(via fb page: A Company of Nations: Studies in Christian Israelite Identity

3 Replies to “The Origins of Adam and Our Adversaries”