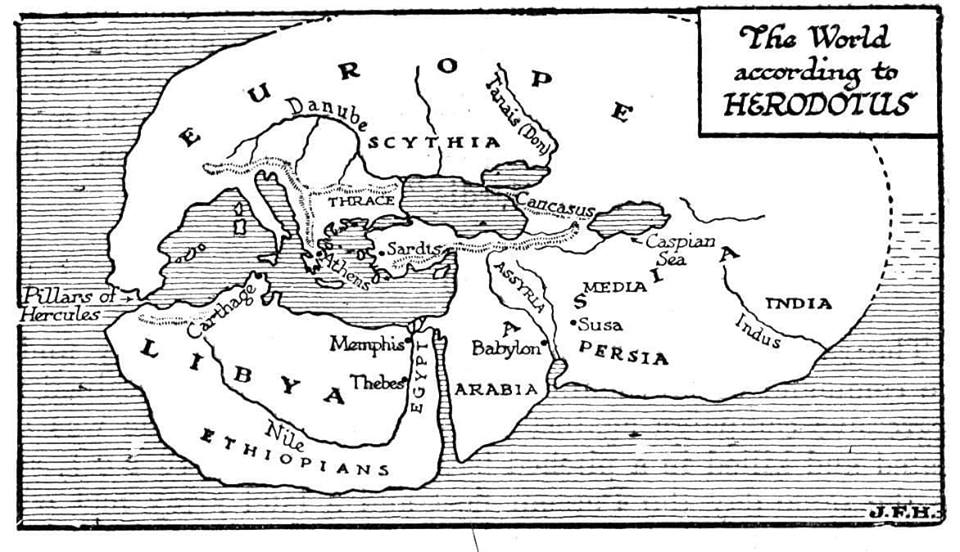 Racially aware White folks need to put out of their heads a few false notions: the notions that Indo-European=Japhetic=White and that Afro-Asiatic=Shemitic or Hamitic=non-White. These are jewish concepts derived directly from the Talmudic concept of Noah having an interracial family. The Edomite-Canaanite Iews are the source of the idea that Shem, Ham and Japheth were of different races, and this Talmudic concept is the source of most modern associations of the Noahitic patriarchs with specific non-White races.

What the Scriptural record itself claims about the race of Genesis 10 is very different from ideas about it prevalent in popular culture. There are only six linguistically Indo-European speaking nations mentioned directly in the Scriptures and acknowledged by mainstream biblical scholars: the Lydians, the Persians, the Ionians, the Medes, the Philistines and the Hittites.

So who do the Scriptures say these Indo-European speaking nations descended from? The Lydians were descended from Lud, a Shemite. The Persians were descended from Elam, a Shemite. Only the Medes (Madai) and Ionians (Javan) were Japhetic. The Philistines were descendants of the Hamite Casluhim. The Hittites were descended from the Hamite Heth, but, as the Scriptures record, his line mixed with the mongrel tribes of the Canaanites. All depictions of these Indo-European speaking Hittites prove that they were non-Whites of a similar racial stock to todays Iews, and Turks (Armenoid) with large drooping hooked noses, prognathic mid-faces, broad heads and slanted eyes. In fact the Hittites are known ancestors of many Turkic peoples who bear their likeness, including the Khazars who represent a portion of the ancestry of the nefarious and infamous Ashkenazi Iews.

Every pedigreed descendant of Shem, Ham or Japheth was White. Japheth was the first Adamic branch to grow out into Europe, but contrary to common perception, most modern Whites are Shemites. The only significant population of pure-blooded Japhethites today are found among the Slavs. The Celts and Germans (Galatae/Scythians) are in fact Shemites via Abraham, Isaac and Jacob-Israel. A topic which Is too expansive for me to address at length here.

How is it that in the field of linguistics there is so little attention paid to the alphabets in which the languages are written? Linguists note the phonetic similarities that link the Indo-European family of languages, but disregard almost entirely the fact that all European languages have used Shemitic alphabets since the earliest civilizations such as the Greeks and Phoenicians set foot in Europe. Our own English alphabet stems from the same Phoenician root. Little do most know that the Phoenician alphabet from which ours is derived is virtually interlegible with, and indistinguishable from, palaeo-Hebrew, the language of the Old Testament. And who speaks the most archaic Indo-European languages today? The mongrels of India, Iran and Afghanistan who still use Sanskrit, Persian and other archaic Indo-European languages.

How did it come about that we Indo-European speakers, todays White race, came to use Shemitic alphabets and adopt many Shemitic words while the non-Whites of India still use Sanskrit, the most archaic and pure Indo-European language and alphabet still in use? Could it be that the bulk of todays Whites were not originally linguistically or culturally Indo-European, but actually Shemitic? While I cannot here give a full accounting of the proof of this residing in Assyrian tablets, Persian inscriptions and Greek classics, I will suffice here to say that a thorough investigation of the history of the Scythians, Cimmerians, Parthians and related Indo-European speaking tribes reveals this to be the case. When the northern house of Israel went into the Assyrian captivity they were placed among the Medes and Persians as a buffer population on the fringes of the Assyrian empire where they would have, by necessity, adopted the Indo-Iranic lingua franca of these Medo-Persian territories. Still their Shemitic alphabet followed them in the form of their runes which are known to derive from the Phoenician alphabet used by the common folk of the house of Israel.

Modern anthropology is a product of the iewdeo-Marxist siezure of Western academia in the 20th century. Up until the mid 20th century philologists widely recognized an intermediary Irano-Semitic, Indo-Semitic or Aryo-Semitic intermediary language group conjoining Afro-Asiatic and Indo-European language groups. This represents the Israelite crossover into the Indo-European cultural and linguistic world.

Any serious students of any discipline of anthropology, history, linguistics, or genetics, need to rethink many ideas about language, culture, and race as they relate to the historical record. To view history accurately from a racial perspective it needs to taken into account that A. linguistic groups are not racial groups, B. the modern racial/genetic genetic makeup of geographical entities do not accurately represent the ancient racial/genetic makeup of their populations in antiquity, C. that the racial makeup of the world has changed drastically since the dawn of modern White civilization in Mesopotamia and the Mediterranean basin broadly, and D. that the jewish paradigm of race in relation to Scriptural heritage is utterly false.

If we fail to transcend these limitations placed on our understanding of our race’s history by an academic sphere in denial of the truth of race, we will forever remain in ignorance of our most ancient roots.

One Reply to “Talmudic Historical Paradigms vs. Biblical and Historical Reality”