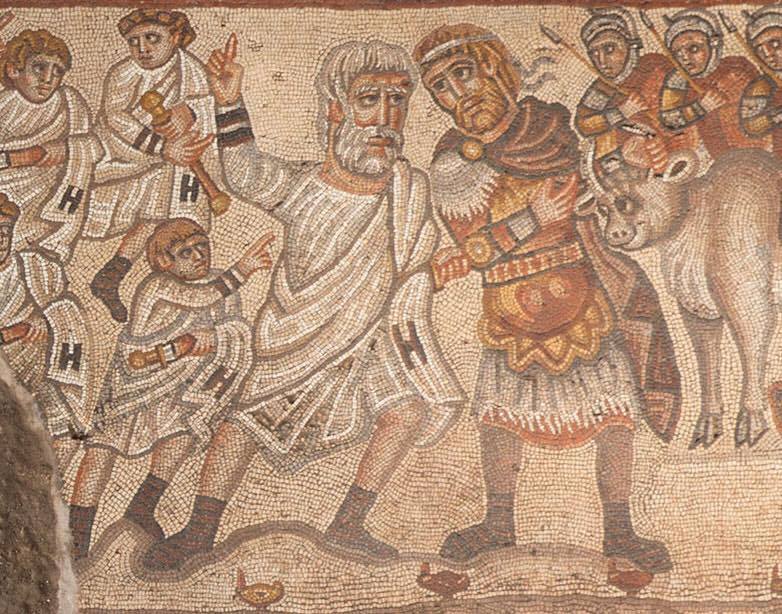 A compilation of available information regarding the racial character of the Adamites, Shemites, Hebrews, Israelites, and Judahites.

1 Samuel 17:42:
“And when the Philistine looked about, and saw David, he disdained him: for he was but a youth and ruddy and of a fair countenance.”

Solomon 5:10:
“My beloved is white and ruddy the chiefest among ten thousand.”

Lamentations 4:7:
“Her Nazarites were purer than snow, they were whiter than milk they were more ruddy in body than rubies.”

Isaiah 29:22:
“Therefore thus saith God, who redeemed Abraham, concerning the house of Jacob, Jacob shall not now be ashamed, neither shall his face now wax pale.”

1 Samuel 16:12:
“So he sent and brought him in. Now he was ruddy, with beautiful eyes and a handsome appearance. And God said, “Arise, anoint him; for this is he.””

Description of Abraham’s wife Sarah from the Dead Sea Scrolls:
“…Her skin was pure white…”

Description of Sarah from the Genesis Apocryphon:
“…How fair are her breasts and how beautiful all her whiteness!…”

The Book of Noah 106:
“…And his body was white as snow and red as the blooming of a rose and the hair of his head and his long locks were white as wool, and his eyes beautiful…”

Description of Yahshua Christ from a letter by Lentulus to the Senate:
“…A man of stature somewhat tall, and comely, with very reverent countenance, such as the beholders may both love and fear, his hair of (the colour of) the chestnut, full ripe, plain to His ears, whence downwards it is more orient and curling and wavering about His shoulders. In the midst of His head is a seam or partition in His hair, after the manner of the Nazarenes. His forehead plain and very delicate; His face without spot or wrinkle, beautified with a lovely red; His nose and mouth so formed as nothing can be reprehended; His beard thickish, in colour like His hair, not very long, but forked; His look innocent and mature; His eyes grey, clear, and quick- In reproving hypocrisy…”

Description of Yahshua Christ from a letter from Pontius Pilate to Tiberius Ceasar:
“…His golden colored hair and beard gave to his appearance a celestial aspect. He appeared to be about 30 years of age. Never have I seen a sweeter or more serene countenance. What a contrast between Him and His bearers with their black beards and tawny complexions!…”

Description of Yahshua Christ from The Archko Volume:
“…He is the picture of his mother, only he has not her smooth, round face. His hair is a little more golden than hers, though it is as much from sunburn as anything else. He is tall, and his shoulders are a little drooped; his visage is thin and of a swarthy complexion, though this is from exposure. His eyes are large and a soft blue, and rather dull and heavy…”

Flavius Josephus, Antiquities 12.4.10 (12:226-227):
“Areus, King of the Lacedemonians (Dorian Greeks), To Onias, Sendeth Greeting. We have met with a certain writing, whereby we have discovered that both the Judaeans and the Lacedemonians are of one stock, and are derived from the kindred of Abraham. It is but just, therefore, that you, who are our brethren, should send to us about any of your concern as you please.”

Flavius Josephus Antiquities 12.241:
“Wherefore they desired his permission to build them a Gymnasium at Jerusalem. And when he had given them leave, they also hid the circumcision of their genitals, that even when they were naked they might appear to be Greeks.”

Genome-Wide Diversity in the Levant Reveals Recent Structuring by Culture:
“…Levant populations today fall into two main groups: one sharing more genetic characteristics with modern-day Europeans and Central Asians, and the other with closer genetic affinities to other Middle Easterners and Africans…”
“…We reconstructed the genetic structure of the Levantines and found that a pre-Islamic expansion Levant was more genetically similar to Europeans than to Middle Easterners…”

Above: A mosaic from Huqoq in Palestine depicting the meeting of Alexander the Great and the Judaeans. Note that the Judaeans are depicted as blonde and with no apparent dissimilarity to the Hellenes opposite them.